I just listened to the new episode of Hi-Phi Nation podcast by Barry Lam. It is called “The Ashes of Truth”. Barry Lam tries to connect story telling with philosophy and does a great job. In this Episode you hear a story about Errol Morris a oscar winning documentary filmer. Before his career as film director he was a pupil of Thomas Kuhn.

I always like hearing about big names and what kind of person they were. As it seems, Thomas Kuhn was not a very kind person. Even though he was well known for this sceptical arguments about the progress of science, he was a very dogmatic person, Morris says. Morris quit his career as a philosopher because of some trouble with Kuhn and became a film director.

The episode is interesting, not only because you can hear some stories about Kuhn as a person and about his theory, but also because it shows that a documentary film director has some problems of a similar kind as a philosopher of sciene. Do our scientific theories really represent the world as it is? Or does the fact that every scientific theory has a specific perspective lead to scepticism and anti-realism.

Realism vs. anti-realism in science and other fields

Morris think we can be realists in documentary as we can be realists in the philosophy of science. He things Kuhn was wrong and Kuhn was a bad person (he uses some more offensive description of Kuhn as I want to state here). I don’t know about Kuhn as a person, but I will try to get a good picture of his theory. ‘The Structure of Scientific Revolutions’ is lying on my table right now.

For Richard Rorty, Peirce did nothing important for pragmatism but giving it its name. He writes:

His contribution to pragmatism was merely to have given it a name, and to have
stimulated James. Peirce himself remained the most Kantian of thinkers – the
most convinced that philosophy gave us an all-embracing ahistorical context in
which every other species of discourse could be assigned its proper place and
rank. (Rorty, 1982 S. 160)

First of all, I think, it was a problem for Rorty, that Peirce understood himself as scientist who investigated the scientific method to show how it helps us to get true believes. Peirce criticised, as Rorty, that we should not believe anything only because an authority told us to. But he meant things like authority, stubborness and a priori reasoning but not the external world as Rorty would like to have it. He was also a fallibilist, which means that he thought that no believe is ever secure of revision.

Peirce was a scientif realist. He wrote:

There are real things, whose characters are entirely independent of our opinions
about  them;  those  realities  affect  our  senses  according  to  regular  laws,  and,
though our sensations  are as different  as  our relations  to the objects,  yet,  by
taking advantage of the laws of perception, we can ascertain by reasoning how
things really are, and any man, if he has sufficient experience and reason enough
about it, will be led to the one true conclusion. (Peirce, 1972 S. 133)

Perception as a justification for a believe? Rorty would shudder. Perceptions can cause believes, that means they belong to the space of causes, but they can never justify a believe, because reasons belong to the space of reasons (who had thought?!). The ultimately truth is only justification, which means for Rorty, agreement in the biggest possible speech community. And is it not that, what Peirce says when he writes:

„The opinion that is fated to be ultimately agreed to by all who investigate, is what we mean by the truth, and the object represented in this opinion is the real.”  (S.  155)

For Rorty pragmatism is most and for all a theory of truth. The picture that the mind can represent things outside of it, is for Rorty the reason for all the philosophical trouble we had. He follows Sellars in the critique of the “Myth of the Given” and Quine’s critique of the analytic-synthetic distinction. But he also cuts the rope to concepts like reference, truth and rationality.

The pragmatic theory of truth means, for Rorty at least, that we can’t make sense of truth as a representational connection betweend concepts and things. First of all there are no concepts, but even as connection between words and things there is no sense to be made. Rorty thinks there is no better way to determine if a sentence is true than to give some reasons for it and reasons are propositions. Furthermore, only propositions can justify propositions. Therefore, a causal connection to a thing can never justify one of our believes.

This is what the pragmatists had right, Rorty claims. They contested the traditional conception of truth. Even though that might be right, Rorty never really engages with the traditional pragmatists like James, Peirce or Dewey. It is true that they criticised the endevor to find criterias for truth that are independent of any context. But all of these writers also had some realistic points in their philosophy. Rorty just never seems to take them seriously.

The most severe problem for positions like Rorty’s is that they see justification only as deduction. A proposition is justified if it follows from true premises which are also propositions. That is actually an extremly narrow picture of justification. If I want to know, wether the proposition “There is beer in my refigerator.” is true, usually I just look intomy refigerator. Under usual circumstances simple visually confirm a proposition is enough to justify it. If there are different criteria for truth in different contextes, why should there not be different criteria for justification in different contextes. Why always deduction? (William James was a direct realist in the philosophy of perception. I bet he would never ask for another justification in form of a deduction for a perceptual judgement.)

So Rorty takes a special feature of pragmatism and declares it as pragmatism itself. But there are many more features to pragmatism that are even better argued for by James, Peirce and Dewey. 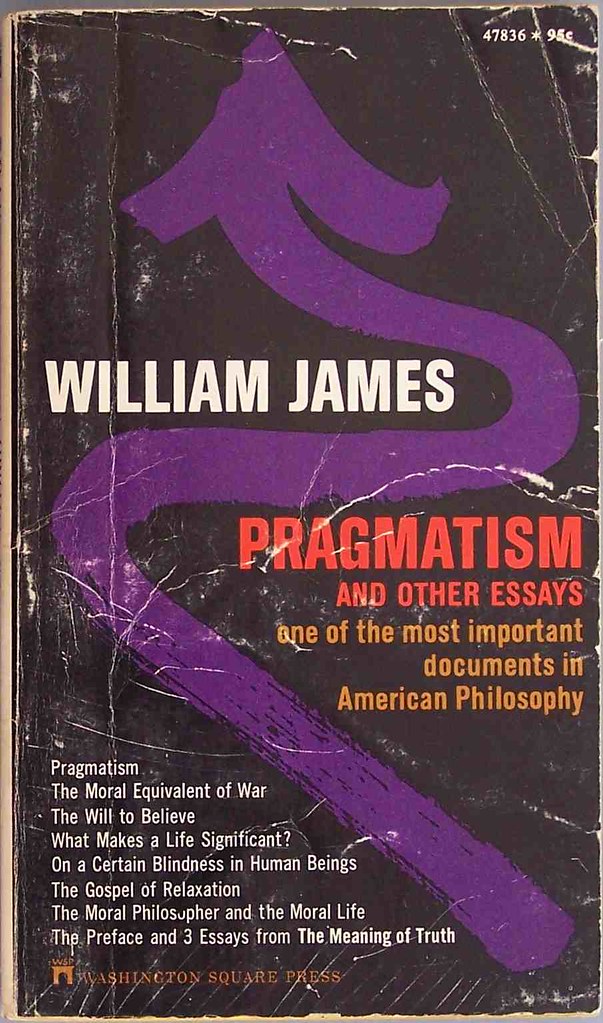 Actually, I wrote my master degree thesis about the relation betweend Hilary Putnam, Richard Rorty and the tradition of American Pragmatism. Both philosophers are influenced by Peirce, James and Dewey but both defend very different theories. That is something I came to wonder when I read the classical pragmatists and texts of Putnam and Rorty. I wondered how this could even be possible.

Rorty defends a relativistic, post-modern, anti-realist philosophy, that emphasizes that philosophy actually is a mistake. On the other hand there is Hilary Putnam, who defends scientific realism and argues that philosophy really has something to contribute to public life. I devoted my master thesis to the question how two philosophers who have a common starting place can end up at two opposite sides of the spectrum of philosophical theories. (Even though pragmatism is not the only tradition these philosophers depend on, but it is an important one. Rorty calls himself a pragmatist, Putnam does not but he devoted a lot of his time and writing to american pragmatists.)

I never really wrote something about that topic here on this blog. But I still defend most of the views I held in my master thesis. So I am trying now to put some points forward in the next posts.

I just finished reading Markus Gabriels Warum es die Welt nicht gibt (Why the world does not exist). Despite being more of a popular science book it is really refreshing. Gabriel knows how to entertain while pushing forward philosophical thinking. He advocates a new form of realism that stands against all forms of constructivism. In order to do so he thinks that first of all we have to ask ourself what existence really means. Therefore he proposes a ontology of sense fields. That means existence is the appearing in a sense field. Electrons and unicorns exist but in different sense fields. While electrons exist in the sense field of the Universe which is the field of natural science unicorns exist as well but only in the sense field of feary tails. This ontological pluralism that reminds of Leibniz or Meinong is the attempt to find a way beyond reductionist monism and dualism. There is no metaphyics that puts all there is under one principle. All we have are different sense fields but no sense field that is all encompassing.

There are two points for me that are difficult to understand:

2. Why should everything that exists make sense? Isn’t a consequence of realism that there could be things that make no sense at all? Just look at H.P. Lovecarfts horror stories. Lovecraft was a realist. He believed that science disenchants all the miracles. That was the reason that he introduced in his works creatures and events that are so foreign to the human mind that you can’t make any clear sense of them. That’s where the horror comes from. The pure strangeness. It is not science fiction in the sense that we take ideas that could make sense in the future like travelling to other planets but the pure strangeness that is so foreign that the more you know about this things the more you get crazy.

So the notion of a sense field and how to understand Gabriels notion of sense is very unclear for me. I hope that his forthcoming philosophical works(in the academic sense) will make this ideas more clear.

Just started this new blog and I hope that I can contribute to the blogosphere and enrich it with some thoughts worth thinking. Philosophy is occupied by anti-realist and construcitivist theories and only for some years now there is a realist reaction. Post-Modernism showed its effects in media populism and other forms of “anything goes” in politics, science and culture. But we feel that there are events that aren’t only constructed by our concent schemes. The new wars and the financial crisis showed that a new realism has to be thought. One that emphasis that we aren’t in control of everything and that truth is not a relic of metaphysics that has to be overcome. This blog will be all about that realist turn (or speculative turn as some may call it). The search for a new realist ontology and epistemology for overcoming not truth but post-modernism.

I am a Philosopher with a M.A. in Philosophy from the University of Erfurt, Germany. My interests are the philosophy of mind, metaphysics, epistemology and naturalism. I am writing my PhD-thesis on the topic of liberal naturalism.